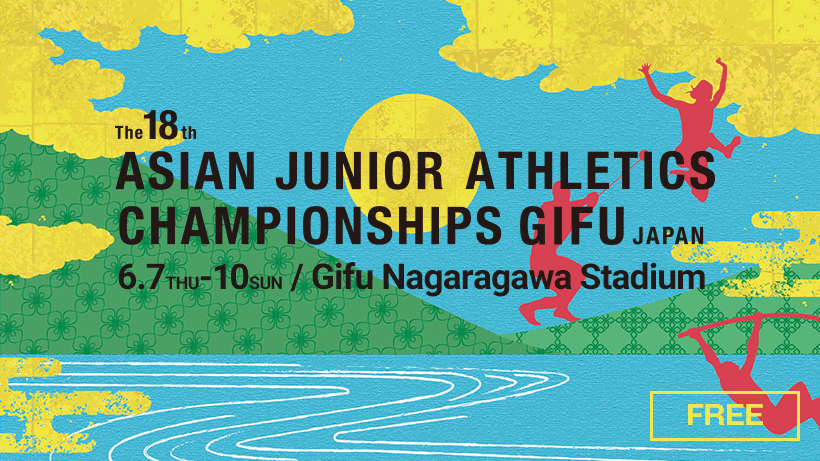 On the last day of the 18th Asian Junior Athletics Championships in Gifu, the events started in the afternoon. It was sprinkling. The temperature is about 24℃. 6 men’s finals and 5 women’s finals were held.

Japan collected two medals in the women’s 400mH. One was the gold Kasumi Yoshida won in 58.43 setting her personal best time, the other was bronze Natsumi Murakami won in 58.92. Jui-Hsuan Yang of Chinese Taipei put out a last spurt and completed the race on the second place to win the silver, clocking 58.89.

Furthermore Japan won the gold in the men’s 400mH, too. Yusuke Shirao won the close race in 50.52 against Bassem Mohamed Awad Hemeida of Qatar. Hemeida finished the race in 50.55. Mahdi Pirjahan of Iran picked up the bronze in 51.18.

The men’s 200m Final(-0.2) was a very close game, especially competing among the top 3. Tai-Sheng Wei of Chinese Taipei won this exciting race by a hair in 21.05 and earned the gold medal. Minkyu Shin of Korea was runner-up with at time of 21.06 and Jasutinjunpei Tsukamoto of Japan slid into the 3rd , setting his personal best time in 21.09.

Nozomi Tanaka of Japan set a new meet record with a run of 9:04.36 in the women’s 3000m. She dominated the race from the beginning until the end and won the gold medal. Yuna Wada of Japan finished 2nd in 9:14.13, and completed one-two finish of this competition.. Fang Liu of China earned the bronze medal.

Second one was High Jump. Kyohei Tomori of Japan and Nuh Abdulkadir Ibrahim Anuh of Qatar went head to head at the moment two of them cleared 2m14. But only Tomori made it cleared 2m16, setting his personal best. He finally won the championship of this meet. Hao Zhang of China earned the bronze with a jump of 2m12.

Karin Odama of Japan won the gold in the women’s Heptathlon with a total of 5133 points. Cai-Juan Chen of Chinese Taipei picked up the silver with a total of 4925 points. Diana Geints gained a total of 4804 points and brought the bronze to Kazakhstan.